one hour prior to theatre performances through March 31, 2002.

This art exhibition is in complement to Steppenwolf's production of

Erica Erdmann (screenprints, etchings & dye on tracing paper) received her BA from Loyola University in Chicago and also studied at the Loyola University Rome Center in Rome, Italy. Recently, she received her MFA from the School of the Art Institute of Chicago. Erica's artwork has been exhibited at the School of the Art Institute, and her work has appeared in the "art windows" of Hanig's and Salvatore Ferragamo's on Michigan Avenue and Marilyn Miglan's on Oak Street in Chicago. "As an artist, the camera is the first exploratory tool I use. Rolls of film are exposed to brainstorm an idea; light, shadow, depth, surface texture and color are all elements sought through the editing process. Overall, I have very little interest in whether my audience believes my images are either some sort of editioned print or a photograph, but whether they can grasp the melding of the processes, the gaps of information, and how the final image accentuates the distortion of reality through the processing from real life to photograph to half-tone (or more recently stocastic) dot patterns. Work is not about being a photograph or a print as much as it is about the various transformations an image makes, and the question of how it is what it appears to be when as an attempt at representation is automatically a misrepresentation as it is no longer what it was?"

Sandra Frank (Iris Prints) graduated from Southern Illinois University with a degree in photography. After working as a photographer's assistant in Chicago, she opened her own studio before moving to San Francisco. "I photograph flowers simply for the pure joy of it. I began 'light painting' flowers with a fiber optic light source. Each unique exposure can take five or more minutes while I walk around the darkened set using tools to create softness here or a hard-edged texture there. Often, after seeing the film, I will start over and fine-tune the light painting until I achieve the right balance of object and texture. I know I've succeeded when the flower takes on a new life of its own. The photographs in this collection have been photographed in the studio using a large format 4 x 5 view camera. The lighting techniques varied from using studio strobes to a fiber optic lighting system, often employing several types of lighting within one photograph. The original color transparencies are the digitally scanned on a high resolution laser scanner and seamlessly reproduced on 140 lb watercolor paper using the IRIS dye jet printer. Each image is proofed, UV coated, signed and then archivally matted." 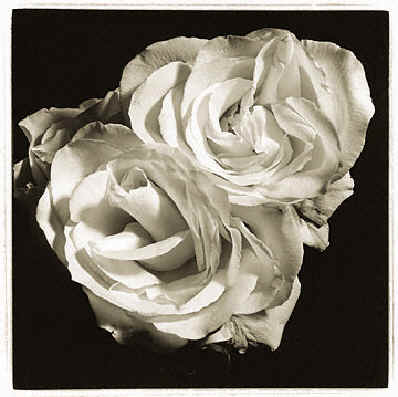 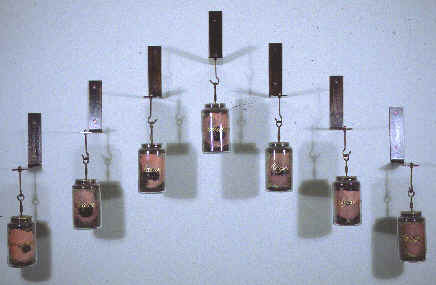 Carrie Notari (Photography/Mixed Media) uses toned silver gelatin photographs, glass jars, oil paint, seeds, dirt and rice paper to create her unique mixed media works. She graduated from the Rhode Island School of Design with a Master of Fine Arts in Photography and went on to teach at the University of Kentucky. Shortly thereafter, she moved to Chicago and became an Assistant Professor of Art at Chicago’s North Park College until 1992. Her work has been shown throughout the U.S., with exhibitions in Chicago at Raw Art Gallery, the Old Town School of 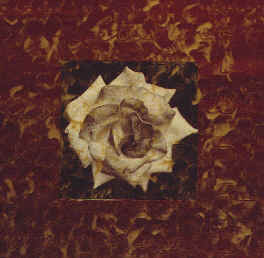 Music, Eclectic Junction, Zeus Gallery and Aldo Castillo Gallery. Her work can be found in many corporate, university and private collections. In 1991, she received an Illinois Arts Council Award which she used to travel and focus on mythological and classical themes in Greece. In 1992, she received a Fulbright Award to study classics at the American Academy in Rome and produced another body of photographs related to ancient sites. In 1993, she received a Chicago Arts Assistance Program grant. It was at this time that Carrie opened her own photography studio. Carrie uses various flowers to symbolize couples and their relationships.

David Solzman (Gicleé Prints) has spent his life celebrating, studying and photographing both natural and human environments. Solzman studied photography with Sam Abel of the National Geographic and with Arthur Meyerson and his photography evolved during the thirty-five years he served as a professor of urban geography at the University of Illinois at Chicago. Solzman participated in CITY 2000 and his work was shown in City 2000 exhibitions at Gallery 312, The Chicago Gallery (old water tower), Chicago Art Expo, The Chicago Historical Society, and in the final exhibit at the Chicago Cultural Center. Solzman's work has been shown at the Walsh Gallery, University of Chicago and the Cliff Dwellers Club. Currently, twenty-six of Solzman's images form an exhibit touring Chicago under auspices of the Chicago Sister Cities International Program. Solzman's work has appeared in Chicago magazine, Where, and in Midwest Living. His photographs have illustrated articles in the scholarly journal Popular Culture published at the University of Chicago. His recent book, The Chicago River, published in 1998, features 85 of his images. He produced the cover image for the blues album of the year 1997, Call Me, and his Chicago skyline poster "Power Center" has been a best seller for many years. David Solzman's images are included in the collections of major corporations and currently, seventy of his images grace the website of Chicago's famed Museum of Science and Industry. Mayor Richard J. Daley presented one of Solzman's photographs to the Mayor of Osaka, Japan when he came to Chicago to dedicate the refurbished Japanese garden in Jackson Park. Solzman’s developing work continues to celebrate the beauty of the world and to serve as a reminder of the interdependence of the human and natural worlds.