Please join us in celebrating the inaugural Evanston Art Walk, a juried exhibition of artwork by Illinois artists displayed in storefront windows and other areas inside businesses along Central Street in Evanston, Illinois during the month of October 2008.    Evanston Art Walk festivities include a benefit and receptions held throughout the month of October inside area businesses.

The Art Walk is presented by Anatomically Correct, a non-profit 501(c)(3) organization and is endorsed by the Central Street - Evanston Business Association. 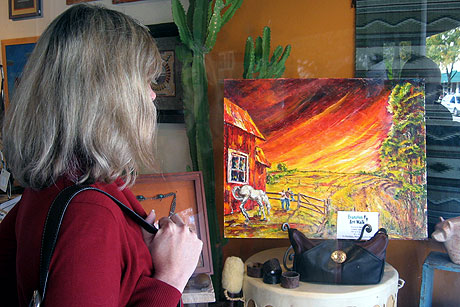 Howard Jacobs' painting in the window of Dancing Bear Gallery

Nancie received a BFA in Painting from the University of Illinois - Urbana; a MA in Painting, from Eastern Illinois University - Charleston (also a 3 year Faculty Instructor of Art.)    She has studied privately with American masters: Schmid, Silverman, Shapiro, Gerhartz, Burdick, Aspevig, Daily and Auster.    Her award-winning work has graced magazine covers & catalogs, has been featured in national art magazines, and published as posters for many Chicago fund-raising events.   Pure Color: The Best of Pastel & Best of America Pastels are books recently released that include her work. She is a member of the Oil Painters of America, Chicago Plein Air Painters, and a signature member of Pastel Society of America and Chicago Pastel Painters.     Nancie is owner of Art De Triumph & Artful Framer Studios, a custom framing and fine art studio, est. 1979.   She was named "Artist of the Year 2005-2006 & 2006-2007" by the Chicago Convention & Tourism Bureau and "Business Person of the Year 2008" by Chicago's Lincoln Park Chamber of Commerce.

Alan Leder has a BFA in Painting from Northern Illinois University and an MFA in Sculpture and Filmmaking from the School of the Art Institute of Chicago. He has been a practicing artist for over 40 years, presently focusing on digital photography and mixed media. He has taught photography, filmmaking and film history at Columbia College, Elmhurst College and University of Illinois, Chicago. Alan has curated and juried exhibitions for college and university galleries and, most recently at the Evanston Art Center. Curated exhibits include: "Inside the Box-A Shoebox Show" Parkland College (2005) "Richard Loving - Paintings" (2006, EAC) "Obsessive Explosive" (2006, EAC), Corey Postiglione-Works on Paper" (2008, EAC). Projects in development include, "Without Borders- A Global Perspective"(2009, EAC). Alan has served on Fellowship juries and has conducted graduate critiques in ceramics, painting, photography, video and computer generative systems at various colleges and universities in Illinois and across the US. Alan was Asst. Visual Arts Director and Coordinator of Chicago's Percent for Art Program at the Chicago Dept. of Cultural Affairs, and for 18 years, the State Director for Visual Arts Programs at the Illinois Arts Council. Since 2003 he has been the Executive Director of the Evanston Art Center. He is a resident of Evanston, IL.

The businesses and locations where artwork is on display are all handicap accessible.    Central Street is an east-west street located 2 blocks south of the northern border of Evanston.  Many major streets intersect with Central Street including Sheridan Road, Ridge Avenue, Green Bay Road, and Crawford Avenue.

© 2008 No image on this website may be copied without the expressed written consent of the artist.

Founded in 1991, Anatomically Correct is a not-for-profit organization dedicated to showcasing works by artists in alternative spaces in a combined effort to educate, diversify, and promote community awareness of the visual and performing arts.    Contributions are tax-deductible according to law.