This art exhibition is in complement to Northlight’s production of SideShow, book & lyrics by Bill Russell, music by Henry Krieger, directed by Joe Leonardo. 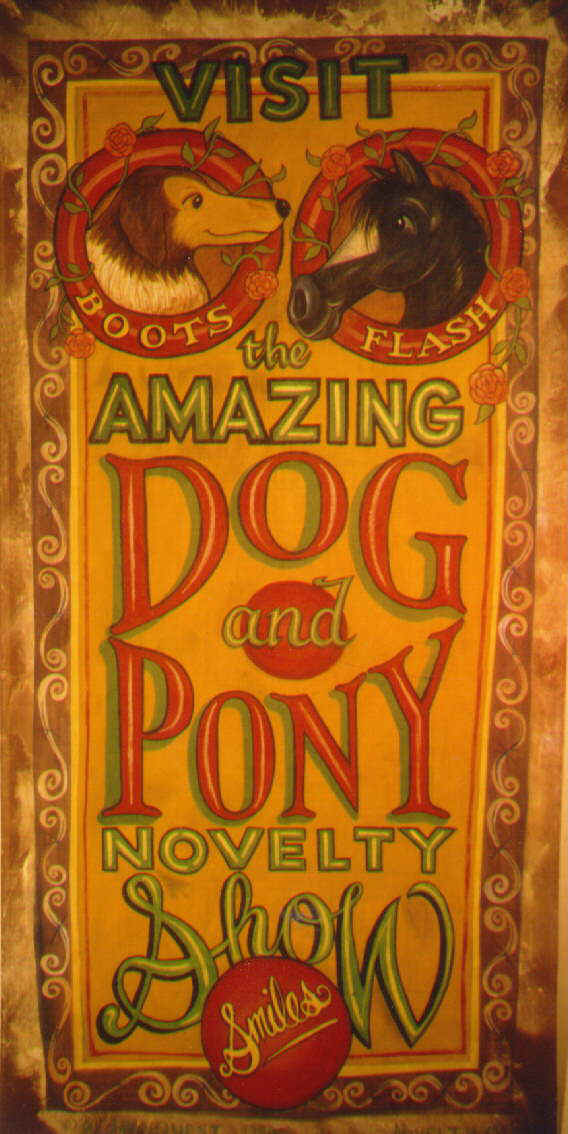 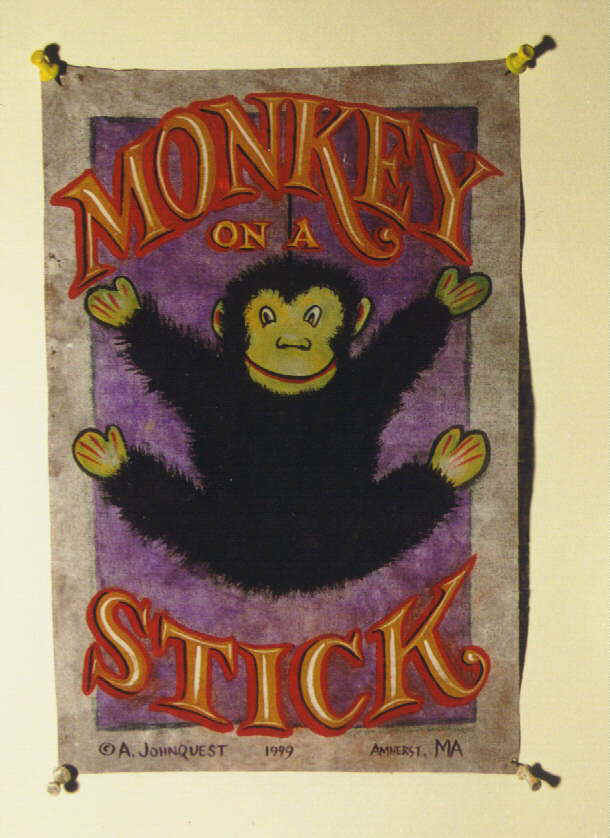 Amy creates sideshow banners, with titles such as The Amazing Dog & Pony Show, Wisdom of the Ages Revealed, Human Oddity, Giant Baby, and Snake Pit Sally, which pay tribute to the spirit of traditional banners. In the early 20 and 30's, sideshow banners were created as a form of advertising to promote an amusement tent fair, sideshow attraction or circus act coming to a rural town. The earliest banners were created by sign-painters, scene painters or self-taught artists who developed a uniquely humorous and easily recognizable style. The images often depicted aberrant acts, human freaks and animal curiosities. Most images were based on fantasy to peak the public's interests, however, many were based on facts, such as human deformities and inherited anatomical diseases and disorders. Sadly, many of the original banner artists have passed on, along with their subjects, leaving us with a unique genre in American art.

While Amy's banners are not direct advertisements for such sideshow acts as they existed in the 20th century, instead, Amy says, "My art mixes influences from the rich history of traveling carnivals & circuses with current events and popular culture. Particularly inspiring are the visual and psychological depths of the (American born) sideshow/freakshow with its' larger-than-life banner paintings. My banners, however, blatantly advertise things that are not for sale -- and may not even exist. They smack with an odd combination of tongue-in-cheek truth, historical kitsch, and sincerity." 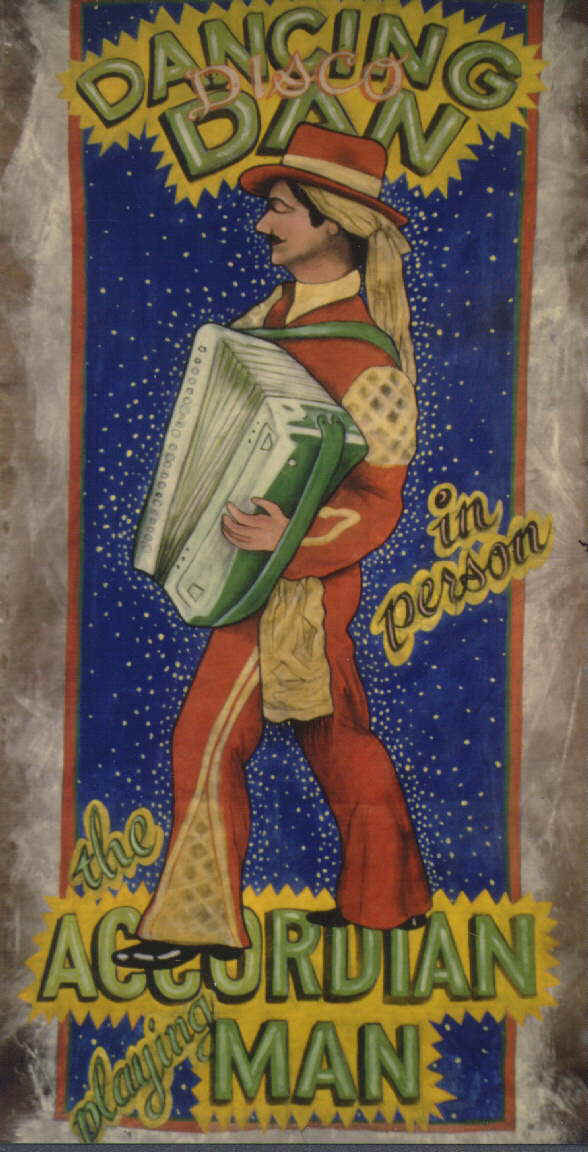 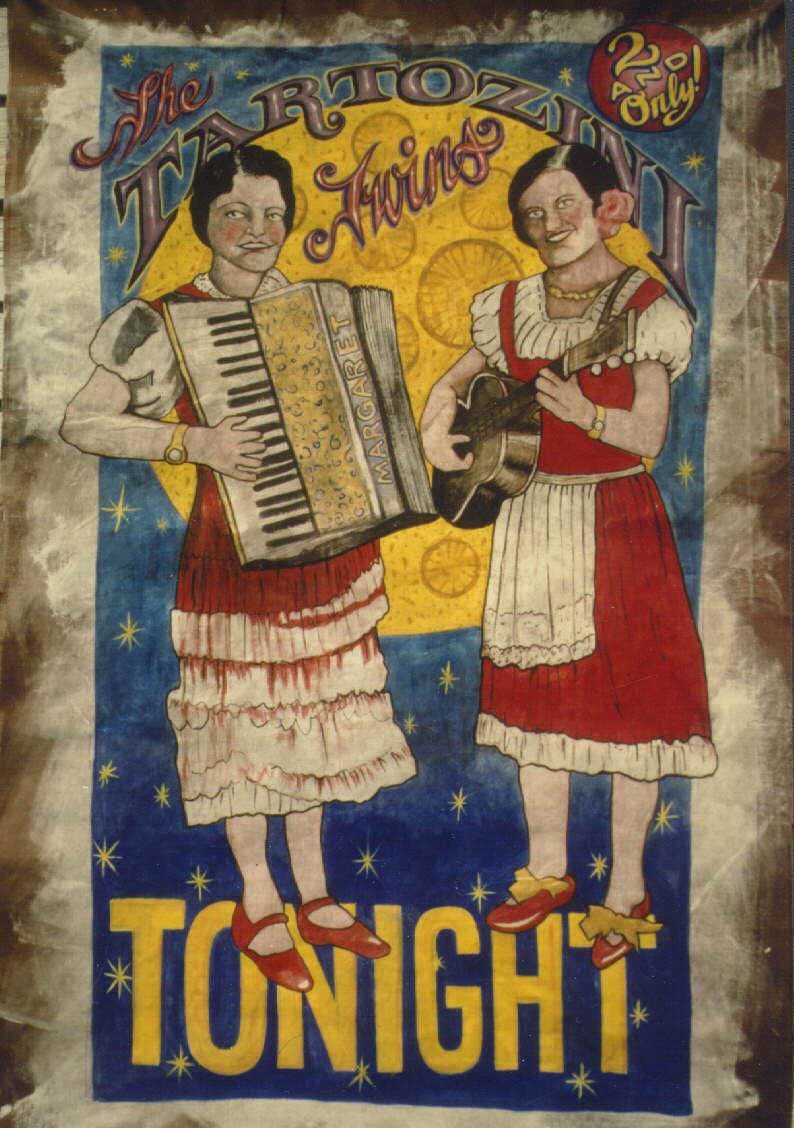 Amy's contemporary banners also differ from the traditional banners in materials and weight. Amy's boldly colored and broadly drawn banners (averaging 7 feet by 38 inches) are created on lightweight acid-free, brown, cotton-mesh fabric typically used for bookbinding. She applies a white, gesso prime coat and uses pastel chalk for the layout. The imagery and lettering are created with a mix of acrylic and casein paint. A final wash of clear acrylic medium, lightly tinted with yellow ochre, gives the piece an aged look. Amy, a former sign-painter herself, began creating banners in 1998 when a music store in Northampton, Massachussetts asked her to create banners for their storefront window. The subsequent attention and numerous requests for additional banners helped to launch her career as a national banner artist. Amy's banners are not only sought after by private collectors, but much of Amy's requests now come from rock bands and concert promoters.

Amy feels a kindred spirit with those who appreciate her work. "We all have some deformity. We've all got something to overcome. The best of us take what we have and run with it, and love our lives with whatever cards we're dealt with."

Anatomically Correct is an Illinois non-profit corporation dedicated to showcasing work by artists in public spaces in a combined effort to educate, diversify, and promote community awareness of the visual and performing arts. Artwork is available for purchase by contacting: