A Look at Violence in American History through 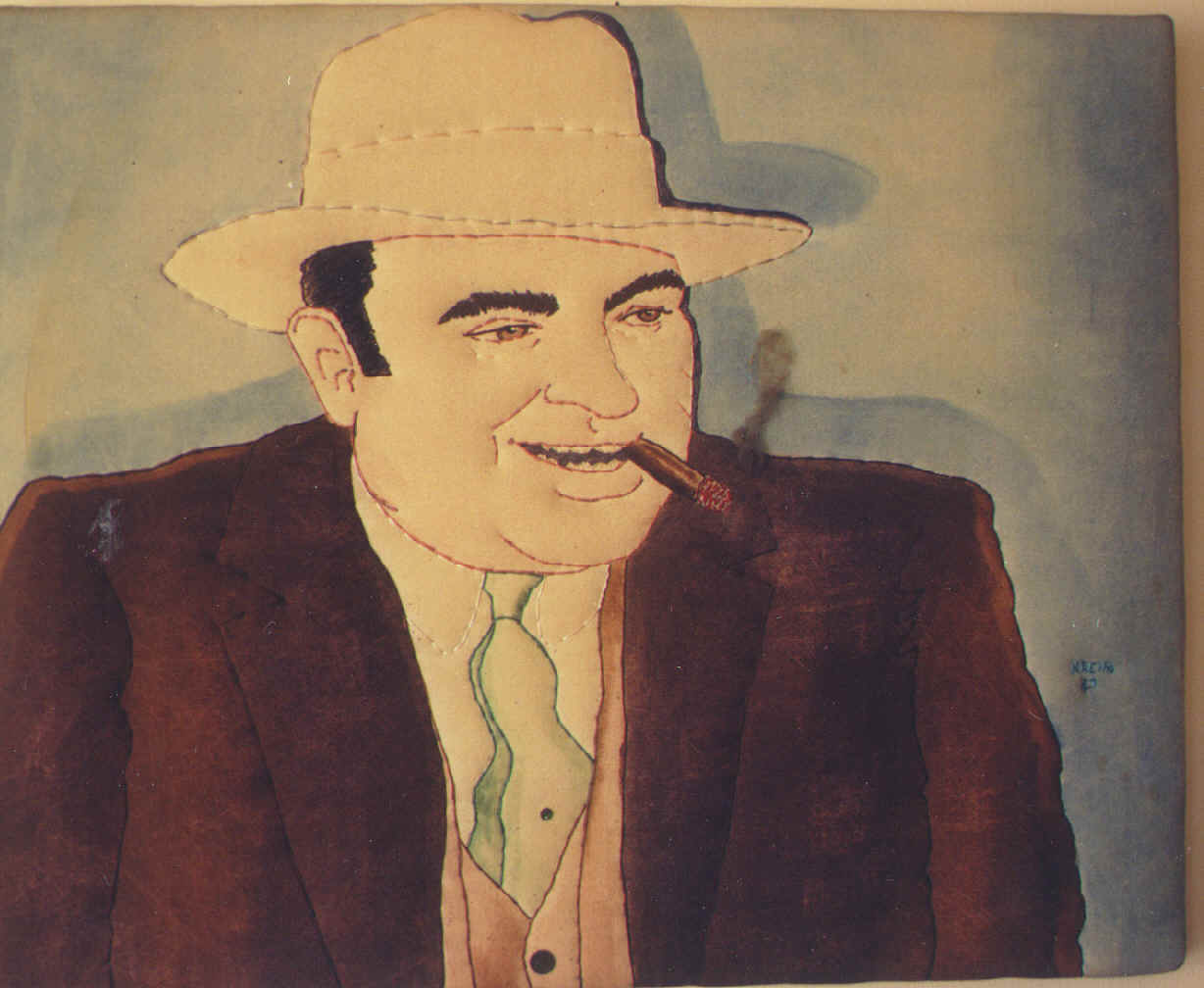 Typically one thinks of a quilt as a comforting patch-worked material focusing on endearing memories, material which is often handed down from generation to generation.   Ken Ellis tells a different kind of story with his quilts. By depicting acts of murder and hate crimes in his large quilts, Ken forces us to look at violence as it is "passed on" from generation to generation. Violence gives birth to violence as Ken's quilts depict the assassination of Sitting Bull and Crazy Horse, portraits of Bonnie and Clyde, Al Capone, Lucky Luciano, the murder of John F. Kennedy, images of the Klu Klux Klan, Hitler and others who commit violent hate crimes. Ellis insists, "I don't glorify it [violence], I just try to show it." 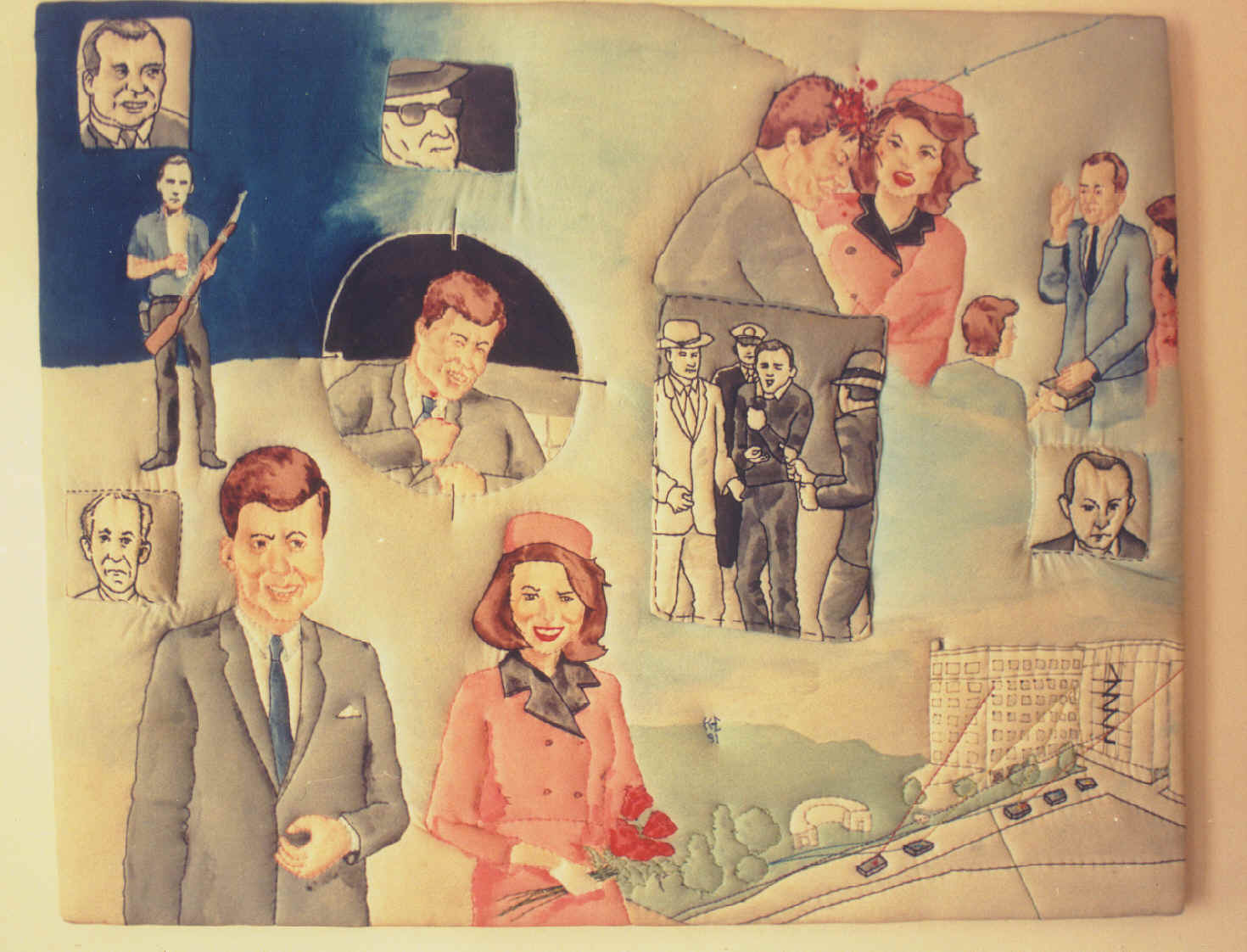 The Assassination of Sitting Bull

(On Dec. 14, 1890, the Sioux police surrounded Sitting Bull's camp at Grand River and attempted to arrest him for participating in the Ghost Dance. Resisting arrest, Sitting Bull was shot and killed. The ensuing battle took the lives of six policemen and eight of Sitting Bull's followers, including his 17-yr-old son Crowfoot.)

A native of Chicago's Ogden Elementary and Lane Tech High School, Ken Ellis was taught at an early age to sew by his father, a maintenance engineer. After trying his hand at fine art by attending the Chicago Academy for the Arts, the School of the Art Institute and Columbia College, Ellis went back to his love of sewing. He began by painting and sewing on T-shirts - selling them at art fairs, and it wasn't long before he needed a larger format. He first draws on the fabric, then paints the colors on the fabric using special "non-bleeding" dyes. After the dye is set, the images are then embroidered and sewn with batting. "I find it very soothing for my nerves…it's therapeutic." Leaving a symbolic signature, Ellis even dots the backs of his quilts with his own blood.

In the past, Ken Ellis has shown his work at Bona Fide Gallery and at Dynamite Gallery in Michigan. 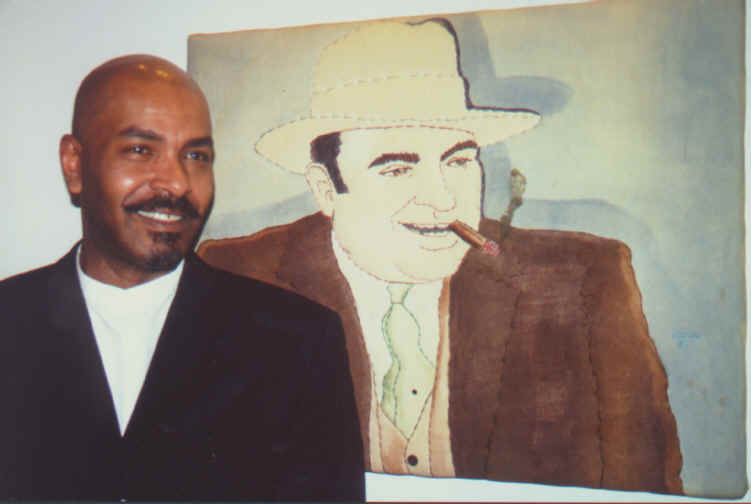 Celebrating its 10th anniversary, founded in 1991, Anatomically Correct is a non-profit corporation dedicated to showcasing work by artists in public spaces in a combined effort to educate, diversify, and promote community awareness of the visual and performing arts.   For more information or to purchase artwork: