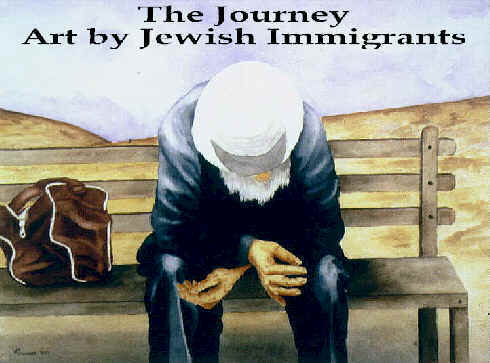 (With Special Guest Speaker Joe Kraus who will speak

This travelling exhibition is held in conjunction with the year-long Chicago Millennium Project, sponsored by the Field Museum.  The Project's theme of "Transitions" helps us to examine the events that link us from each generation to the next, the stories and legends of the past and how they are transmitted to the future.  This exhibition explores Jewish history and the ways we seek to preserve this history from one generation to the next.  Reflecting on the events of the 20th century, specifically "ethnic cleansing," oppression, and the Holocaust, this exhibition will serve as an unforgettable visual legacy for future generations as we enter the 21st century.

For more information on Project Millennium, go to www.ProjectMillennium.org or phone 312-332-8889.

This exhibition is also part of the Chicago Artists' Coalition's Chicago Artists' Month event, a city-wide celebration to promote visual arts during the month of November.  www.caconline.org

BERT MENCO (Oil Paintings and Etchings) "My Dutch-Jewish background has inspired much of my art. History has had an unavoidable personal impact on me. The traumatic events of World War II affected every post-war Jewish child, often by things unspoken. I am no exception. I am sure that in many ways my parents’ history has affected my art as it is impossible to separate myself from these events that have had a major impact on the course of my life. I was born just after the war that divided the century in half. My mother and her family survived the bombing of Rotterdam, though only she and my grandmother survived the Holocaust. My father’s immediate family was completely annihilated, but my father survived the war, rescued by French communists. My parents met while they were refugees in Switzerland; they married on May Day, 1945. While out of the country to save their lives, my family, like many others, was robbed on all sides. When he returned to the Netherlands, my father received ten guilders from the Dutch government; one golden coin to re-start his life. I have been drawing since I was a toddler and have never stopped. Much of my early interest in art came from my mother’s murdered father. He owned an important musical instrument store, arranged concerts in Holland for such luminaries as Louis Armstrong, even flew in airplanes in the thirties. He had attended art school and was very accomplished with watercolors and pastels, producing a beautiful sketchbook after he was forced out of the store by the Nazis. Another important factor in kindling my art was our neighbor, a retired school teacher and surrogate grandfather, Mr. van der Giesen. He often shared his incredible collection of art books with my brother and me. My mother took us to museums. The earliest exhibition I remember was on Jan Toorop’s daughter, Charley, still one of my favorite artists. My first art instructor was Dutch printmaker Maaike Alma. Torn between the arts & sciences, in 1972, I left for Conventry, England to pursue an advanced science degree. I did, however, continue to study printmaking at the Academy Artibus. In 1982, I came to the United States to work in the Department of Neurobiology and Physiology at Northwestern University as a Research Associate Professor. I chose a career in science, but have managed to be very active in the arts. I continue to study printmaking at the Evanston Art Center."    (Adapted from "A Selfportrait Inside Out"  Contemporary Impressions, Vol. 6,  #2, pp.6-9 (1998)  © American Print Alliance)

In addition to the Evanston Art Center, Bert has studied art at the Wekwinkel, Wageningen in the Netherlands, at Lanchester Polytechnic in Coventry, U.K., the North Shore Art League in Winnetka, IL and the Noyes Cultural Center in Evanston, IL. In England, his work has been exhibited at the Cultural Center in Leamington Spa and at the Warwick Gallery.    He has also exhibited his work at the Evanston Art Center, the Suburban Fine Art Center in Highland Park, the Hokkaido Museum, the Dittmar Gallery at Northwestern University and the Columbia Center for Book & Paper Arts,   to mention only a few. 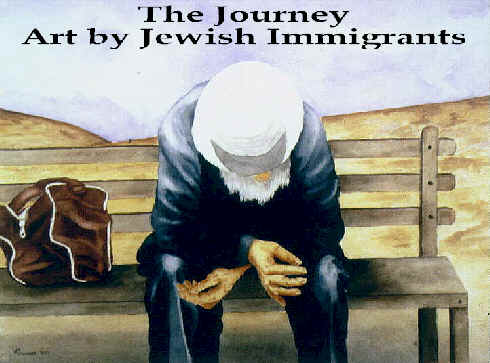 HANNAH MESSINGER (Watercolor) "I was born and educated in Czechoslovakia where I had my early training. This was interrupted during World War II when my entire family and I were taken to various concentration camps. I was the sole survivor. Relatives in America helped me to come to the U.S. at the end of 1946. I was married the following year. My understanding and loving family enable me to continue to pursue my interest in art. I studied continually and exhibited for many years. Due to my background, I was mainly interested in expressing my thoughts on humanism and social concern, mostly in media such as drawing and printmaking. Because of the subject matter and my own emotional involvement, the work was brooding and solemn. But years later, after having expressed all I could about my feelings, it was time to make a complete turnaround. I concentrated on watercolor which became my favorite medium."

Hannah studied art in Prague, Czechoslovakia, the Art Institute of Chicago, the North Shore Art League, Evanston Art Center and Northeastern University. Her work has been exhibited at the Golda Meir Library at the University of Wisconsin, at the Renaissance Gallery in the Chicago Cultural Center, the Blue Moon Gallery in Skokie, and the Illinois Artisans Shop in Chicago, to list just a few. 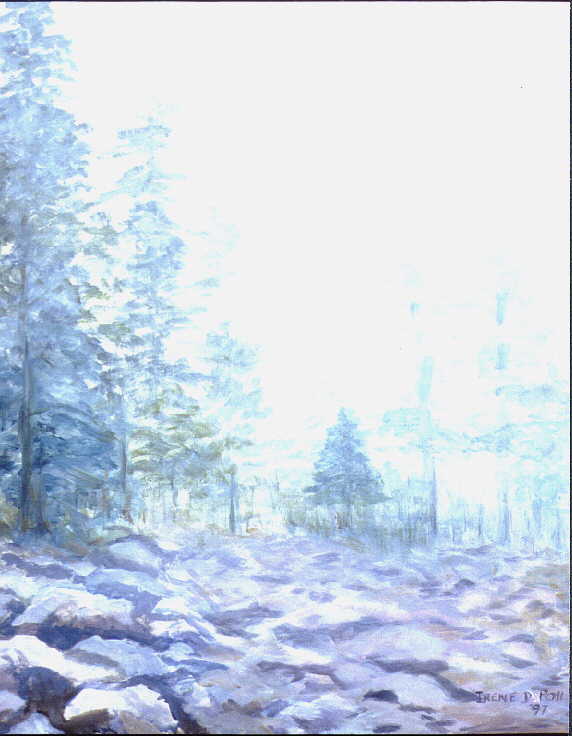 I never saw another butterfly

IRENE POLL (works in Watercolor and Acrylic)   "I was born in Germany in the early 1920’s. By the time I entered fifth grade, Jewish students were relegated to the back of the room, forbidden in gym, pool, sports and all social activities. We were made to feel inferior. We were forced to perform the Hitler salute, learn and sing the lyrics, ‘Jewish blood spurting from the knife,’ and watch parades of shouts, ‘Death to the Jews.’ On leaving the synagogue, we could not stop to greet one another, as by a new ordinance, it was forbidden for more than three people to assemble. During recess in school, I fell and hurt my hand. When I went for first-aid, the coach did not want ‘to touch dirty Jewish blood’ and turned his back on me. One afternoon, as I was doing my homework, several Nazi youths with swastika armbands and heavy boots, invaded our apartment, spat on my parents, forced them to stand at attention and repeat over and over, ‘Heil Hitler’ while giving the salute to them. On April 1, 1933, a Saturday, total boycott against all German Jews was declared. Their homes and businesses were marked by a huge black spot on a yellow field; the same sign used in the Middle Ages to indicate contagious diseases. In 1934, my parents arranged for me to live with relatives in Lille, France. Meanwhile, my father and all Jewish males over 16 years old were rounded up on Kristallnact. He survived hunger and torture during the bitter winter at Dachau concentration camp, and shortly after he was released, permits came from Luxembourg where they escaped in the summer of 1939. I was able to visit my parents in Luxembourg before returning to Lille. However, World War II broke out a few days later and I was again cut-off from my parents. They were able to leave with immigration papers to the United States, together with my brother, just before the U.S. declared war on Germany. Back in occupied France, I was forced to wear a yellow star, branding me a Jew. In June 1942, a little suitcase in hand, the star tucked away in my coat, my aunt pressed the remnant of a shabbat candle into my hand, ‘May it light the way for you always,’ I went into hiding until after the liberation of France. It is a grave responsibility to realize that I owe my life to people who risked theirs. In 1946, shortly after I arrived in the United States, I was reunited with my parents in Chicago. I made my life in America, married, had a family and learned to smile again."

Irene holds a Baccalaureat degree in Humanities and Philosophy from the University of Lille, France, and studied art at the Ecole des Beaux Arts in Lille, and at Oakton Community College and the Skokie Art Guild. Her work has been exhibited at the Dittmar Gallery at Northwestern University, Anshe Emmet Synagogue, Women’s Club of Evanston and Blue Moon Gallery to mention only a few. 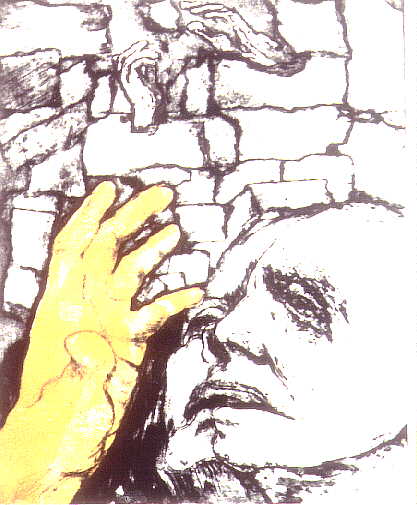 "I was born in Germany during the reign of Hitler.   Encouraged by my grandfather, a folk poet, I embellished his poetry with drawings. From early childhood on, I was exposed to music and art. In 1938, at the age twelve, after the progrom on Kristallnacht (Crystal Night), my parents sent me to England with the Kindertransport, (Children’s Transport) in order to save my life."

In England as a young adult, Ruth associated with fellow refugees, some were musicians, artists and writers. This exposure helped her to develop a deeper understanding of the arts. She grew up fast, and through it all developed a social awareness. Most of her work deals with the human condition expressionistically. After World War II, Ruth settled in the United States. Here she had the opportunity to study and develop her artistic ability. It was not too long before she began to exhibit her artwork. Her own experiences of being able to express deep emotional feelings in her art, and finding it cathartic, led her into the field of Art Therapy. In addition to her painting, she studied Art Therapy in Chicago and worked with behavior problem children in the Chicago school system.

Ruth has studied art at Northeastern University, Oakton Community College, the National College of Education, the School of the Art Institute of Chicago and the Minneapolis Institute of Art. Her work has been exhibited at Anatomically Correct’s exhibitions The Journey: Art by Jewish Immigrants at Steppenwolf Theatre and Growing Old Gracefully at Northlight Theatre, Blue Moon Gallery in Skokie, at the Renaissance Gallery in the Chicago Cultural Center, the North Lakeside Cultural Center, North Shore Art League, Evanston Art Center, American Jewish Arts Club, Dittmar Gallery in Northwestern University, Bradley University, and the Spertus Museum of Judaica.

This exhibition is sponsored in part by Women's American Ort,

an organization for educational resources and technological training.