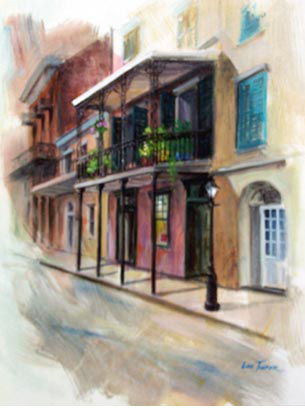 Among the paintings in the exhibit is Mr. Tucker's painting of Tennessee Williams' residence where Williams created some of his dramas and Tucker's photographs of the French Quarter's annual "Stella Contest" where contestants shout the infamous line "Stella!" from A Streetcar Named Desire. 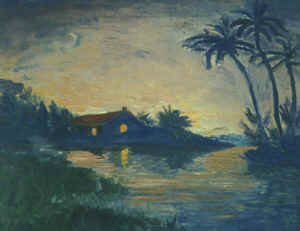 The exhibit also features other historical documentation on the life of Tennessee Williams, including a print of an oil painting, "Tropical Scene" of the Florida Keys, which was painted by Tennessee Williams in 1928 when he was bedridden at the age of 17.

This art exhibition is in complement to Bailiwick Repertory's Tennessee Williams' Play Festival.

Lee Tucker is a French Quarter artist at historic Jackson Square in New Orleans. In addition, he shows in galleries in the U.S. and England. Tucker excels in acrylic and watercolor painting, pen and ink drawings and photography. Although much of his work is inspired by old New Orleans and Louisiana environs, his scenic and slice-of-life representations extend within and beyond the shores of the U.S.

Mr. Tucker's work is featured in corporate collections in this country and Japan and he was recently commissioned by the Louisiana's Elmwood Medical Center to create paintings for their hospital and by the Louisiana Criminal Courts to paint courtroom portraits of their retiring justices. Lee also has numerous internationally distributed CD and album covers to his credit.

When he is not painting, Lee contributes his time and talent to inner city children's arts programs, public television and preservation groups. He is a founding member of Friends of Jackson Square and serves on the French Quarter Citizens for Preservation board of directors, working tirelessly for appropriate development in the Vieux Carré.

Celebrating its 10th anniversary, founded in 1991, Anatomically Correct is a non-profit corporation dedicated to showcasing work by artists in public spaces in a combined effort to educate, diversify, and promote community awareness of the visual and performing arts.   For more information or to purchase artwork: Anatomically Correct, Art in Public Spaces