All The World's a Stage II

Artists examine the evolution of Chicago area theatres from past to present (including vaudeville stages, silent pictures, live performance venues and motion pictures) to sometimes extinction. 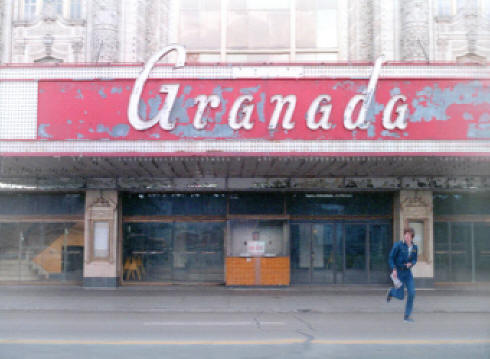 EXTENDED BY POPULAR DEMAND THROUGH SEPTEMBER 8, 2019!

Admission to the exhibition is FREE.

SAVE THE THEATRE INDIVIDUALS:

Joe DuciBella - June 29, 2007 - Theatre historian and founder of Theatre Historical Society of America.    He led the renovations of two of Classic Cinemas' most historic theatres, the Tivoli Theatre, in Downers Grove, IL, and the Lake Theatre, Oak Park, IL.    Joe worked for B&K in many of its theatres, including the Marbro and Uptown theatres.   The Chicago Theatre was saved with his help and he was active as a volunteer in the continuing "Friends of the Uptown" effort since 1979 – even before the theatre closed to the public.

Dorothy Mavrich - In 1978, a campaign to "Save the Rialto" for future generations as a performing arts center was initiated by local piano instructor and then president of the Rialto Square Arts Association - now the Cultural Arts Council of the Joliet Area, Dorothy Mavrich, (who passed in 2015 at the age of 94).   "Save the Rialto" involved the entire community.  With the assistance of local businessman, Christo Dragatsis, support was sought from city, state and federal officials. Former State Representative, LeRoy Van Duyne, was instrumental in obtaining the necessary funds for purchase of the properties.

A Theatre of Our Own: A History and a Memoir of 1,001 Nights in Chicago, Richard Christiansen © 2004, Northwestern University Press, Evanston, IL

Founded in 1991, Anatomically Correct is a not-for-profit organization dedicated to showcasing works by artists in alternative spaces in a combined effort to educate, diversify, and promote community awareness of the visual and performing arts.     This project is sponsored in part by the Illinois Arts Council, a state agency and the Skokie Park District.