The term "outsider" is a descriptive word invented by collectors as a way of classifying the raw work of untrained or self-taught artists.    These artists are sometimes also referred to as naive, visionary, folk, or primitive artists.  The artists tend to be isolated or loner individuals, and many prefer to remain unknown or create an alias name or identity; others are mentally ill.

"Outsider Art" has become very popular in the 20th century, in spite of the fact that many academics do not consider the work created by these artists to have any artistic value or significance.    In that context,  "Outsider" might apply to those who do appreciate their work.

The exhibition will be on display at:

and one hour prior to theatre performances

This art exhibition is in collaboration with the David Leonardis Gallery

and is in complement to Steppenwolf's

production of The Ballad of Little Jo,

a musical by Mike Reid and Sarah Schlesinger. 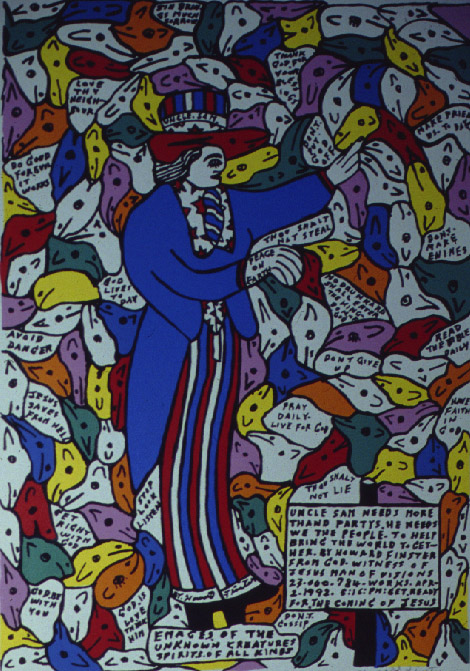 The Reverend Howard Finster was born in 1916 in Valley Head, Alabama. He was married with five children and he now resides in Summerville, Georgia.

Reverend Finster is one of the country's most talked about white, outsider artists. In 1965 he heard a voice from the Lord which told him to transform two acres of land into a "Paradise Garden." Using junk, broken dolls, tools and clocks he embedded these materials in concrete walls which surround a tower thirty feet high built of bicycle parts and his own church called "The World's Folk Art Church." "Paradise Garden" is an ongoing project expressing his religious conviction and creativity and heexplains that he assembled the pieces for a purpose-"to mend a broken world." In 1976 he had a vision of a tall man at his gate in which the Lorddirected him to begin painting "sermon art" because, "preaching don't do much good; no one listens- but a picture gets on a brain cell." 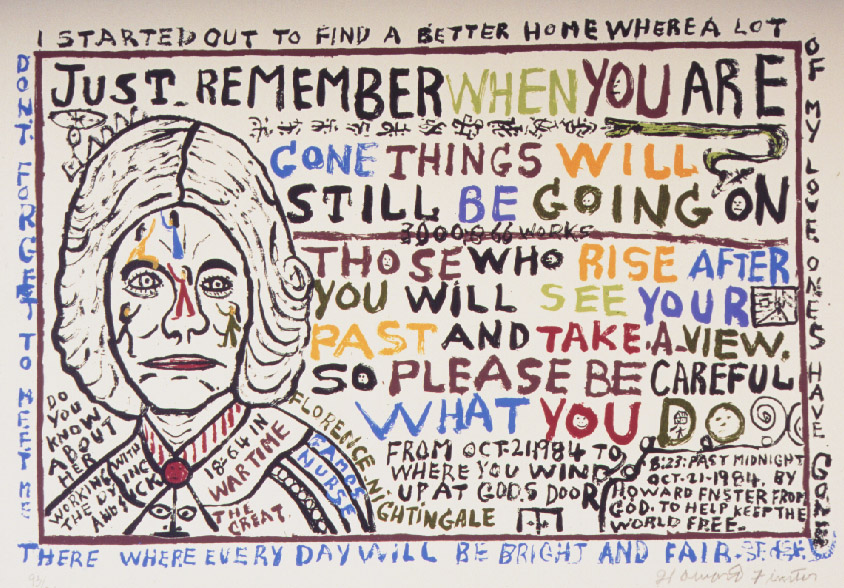 The voice commanded him to paint this sacred art and to create individual paintings and portraits of personal heroes, religious and patriotic images and to pass on his spiritual messages to the world. Finster's paintings have evangelical themes and inspirational images which come from his own interpretations of the bible. Angels and saints as well as earthly characters are portrayed. All of his paintings contain witty, printed quotations known as "Finsterisms." 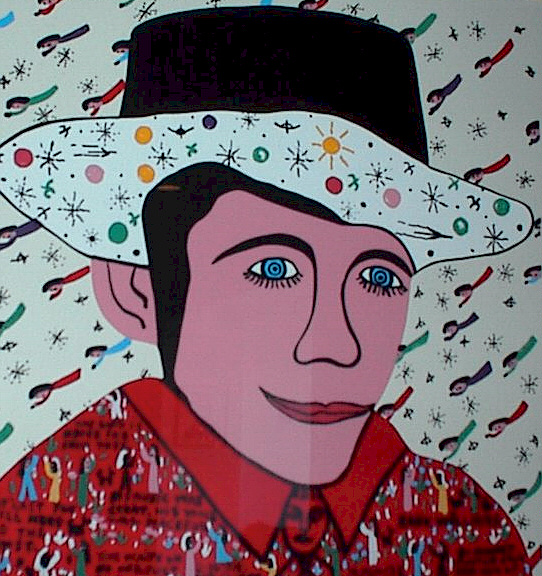 Several of his paintings show how he was influenced by the imagery on postcards or popular magazines. Some of his creations have joined the contemporary world through his paintings for the album covers of the rock groups REM and The Talking Heads.

Finster makes art out of nail heads, gourds, bottles, mirrors, plastic, snow shovels and even an old cadillac, however the majority of his works are usually made out of plywood or heavy canvas with the works ranging in size from a few square inches to 8-9 feet in height. His art is original, innovative and expressive.

He believes he came from another world and is often referred to as "This Stranger From Another World." Finster believes the more he paints, the more people he can save. The works are presented in many forms, sometimes called "paintings in tongue," visions of other worlds where people live in harmony.

Finster has his visions for the future. "A day when one computer will run the earth and the final day when giant tidal waves will cover the world. And then the time will come for G-D to create men again- men like the Reverend Howard Finster."

Robert holds a degree in Philosophy and lives in his car where he travels around Chicago painting surrealistic cityscapes.

Dylan is a self-taught artist living in San Jose, California.  No further information is available on Dylan.

A well-known schizophrenic, Chicago artist and rock-and-roller/rapper Wesley Willis can usually be found walking the streets of Chicago. His cityscape drawings are a reflection of his life on the streets.  Wesley gained popularity when he joined the band, The Wesley Willis Fiasco,and may be coming to a neighborhood near you.