On Exhibition at Steppenwolf Theatre

Artwork is on display at Steppenwolf’s 2nd Floor Gallery through January 22, 2000.

There is no charge for viewing of the artwork.

Regular viewing hours are one hour prior to theatre performances.

This art exhibition is in complement to Steppenwolf’s

production of Hysteria by Terry Johnson, Directed by John Malkovich.

John attended the School of the Art Institute of Chicago on a scholarship awarded by the Park Ridge Art League. He also trained as a photographer in the U.S. Navy. In Chicago, his paintings and sculpture have been shown at the Contemporary Art Workshop, Artemesia Gallery, August House Studio and Lucky Horse. His work has also been shown at the Rockford Art Museum and at the Evanston Art Center and most recently at Anatomically Correct’s exhibition "Growing Old Gracefully: Art by Seniors" at Northlight Theatre. His artwork can also be seen in Disney Studios feature film, "High Fidelity."

Reneé grew up on a farm in Central Illinois. Because her family did not own a television set, much of her youth was spent outdoors with animals and nature in a state of isolated tranquility. Since she was old enough to pick up a paintbrush, her world has been filled with paintings and drawings. Reneé received a B.F.A. from the Illinois Wesleyan University in Bloomington, IL and studied sociology and anthropology at the University of Chicago. Reneé is listed in the publications Who’s Who of American Women (21st Edition) and the Encyclopedia of Living Artists (10th Edition).

Her artwork has been exhibited at the Elmhurst Art Museum, the Museum of Science and Industry, Bailiwick Arts Center, Woman Made Gallery, Hyde Park Art Center, Cornelia Arts Building, Wood Street Gallery, Artemesia and ARC Gallery of which she is a member. In addition, her work has been shown at the Gang Gallery and the Limner Gallery in Soho, NY and at the Swan Gallery in Sydney, Australia. Her work is also part of a permanent collection at Chicago’s East Bank Club and can be found in The White House as part of President William Jefferson Clinton & Hillary Rodham Clinton’s collection. 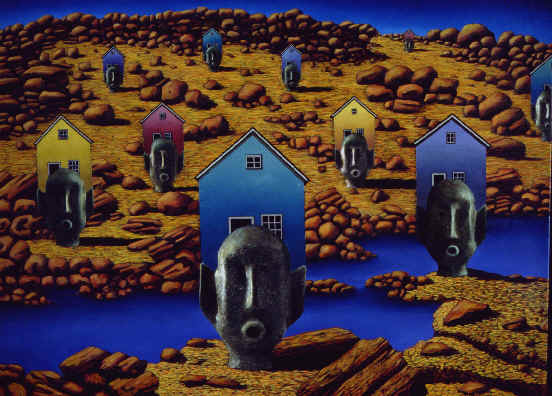 JACQUELINE MOSES Jacqueline holds a B.F.A. from the School of the Art Institute of Chicago and a Master of Fine Arts degree from Northern Illinois University in DeKalb. She has had many solo and group exhibitions locally and abroad. Her work can be found at the Tucson Museum of Art, the Indianapolis Museum of Art, Rockford Museum of Art and the Illinois State Museum in Springfield.

Robert’s work focuses on the psychological/philosophical realm. Defining his process, Robert states "Working within the context of surrealism, my objective is to draw from a single ephemeral moment of revelation at the precise moment when I can glimpse into the subconcious level of my mind (as in a dream) where the constructions of our normal rational thought processes (which always want to impose order) have let down their guard."

Robert received a B.F.A. in Arts & Architecture from Pennsylvania State University and has also studied at the Philadelphia College of Art, in PA at the University of the Arts and the Fleisher School of Art. Robert was born in Darby, Pennsylvania in 1961 and currently lives in Folsom, PA. This is Robert’s first exhibition outside of Philadelphia.

Tony is an artist, filmmaker, lecturer and professor.   Born in Miami Beach, Florida on September 16, 1937, Tony went on to receive a B.A. (cum laude) from Trinity College in Hartford, CT and a B.F.A and M.F.A from Yale University’s School of Art. His work has been shown in numerous galleries and museums. In Chicago, his work has been shown at August House Studio, Lyons-Wier Gallery, and the Betty Rymer Gallery. He work has also been shown at the Ford Center for the Fine Arts (Knox College, Galesburg, IL), the Rockford Art Museum, the Suburban Fine Arts Center and Hinsdale Center for the Arts. His work has also been included in many traveling exhibitions in the United States and abroad. He has received many awards and fellowships and his work can be found in the Museum of Contemporary Art and The Art Institute in Chicago. Tony has been a professor of painting and drawing at the School of the Art Institute of Chicago since 1969 and has been the Chairman of their painting and drawing department since 1998. Tony believes his works are particularly suited to complement Steppenwolf’s production of Hysteria, "due to the seven years of intensive, nearly classical Freudian psychoanalysis I endured in the 1970’s and early 80’s." 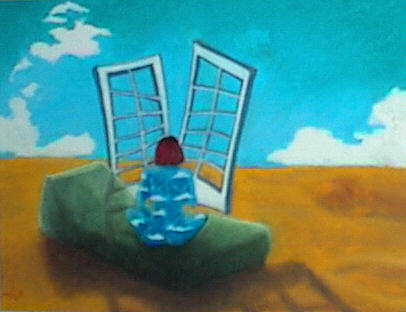 Ray believes that through painting, he is able to explore his sub-conscious self, discovering parts of himself that his conscious will not allow him to express. Ray received his B.F.A. in drawing from Northern Illinois University and has exhibited in many galleries throughout Chicago, in addition to three exhibitions in Germany. Ray has worked steadily as a scenic carpenter at Steppenwolf for the past two years. Ray is also the Technical Director at Chicago’s About Face Theatre, and continues to work with many other theatre companies on a freelance basis.

Anatomically Correct is a non-profit corporation dedicated to showcasing work by artists in public spaces in a combined effort to educate, diversify, and promote community awareness of the visual and performing arts.