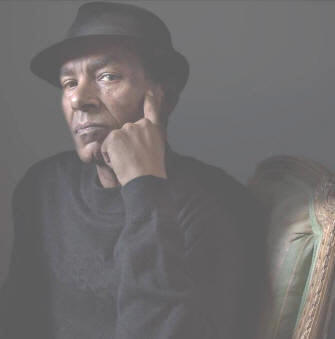 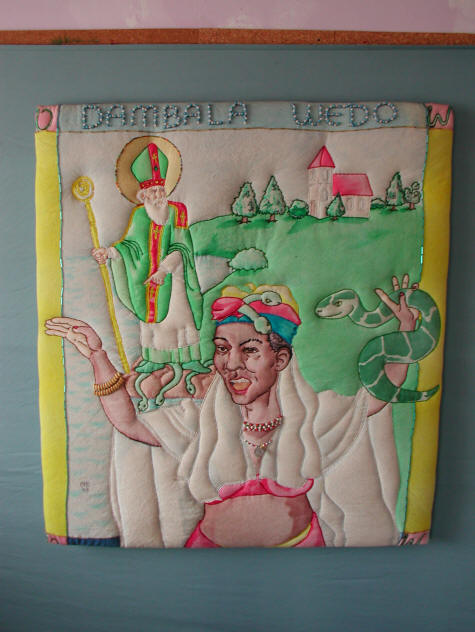 (Oct 30, 1954  –     ) Ken is a native of Chicago and credits his interest in art to his father who taught him to sew.  Ken's artwork often depicts shocking historical scenes of the life of black and native Americans.  He also incorporates Haitian voodoo and other folk history in his work and children's nursery rhymes.   Ken's work is exhibited around the country and was featured in Anatomically Correct's exhibition Sewing the Seeds  A Look at Violence in American History and Fairy Tale Friends in Chicago.   Ken's Bonnie & Clyde quilt from the Sewing the Seeds exhibition can be seen on the cover of Dr. Dog's "Fate" album released on July 22, 2008 http://www.myspace.com/drdog.

Links:   Sewing the Seeds  A Look at Violence in American History and Fairy Tale Friends

"I am Chicago born, bred & educated, made my debut at Cook County Hospital.   My early childhood was in BronzeVille, one of my earliest memories is drawing on the blank pages of a set Biblical storybooks my Ma had bought me. In 1960 my family moved to the near north side, my Pop took a job as a building's engineer/ janitor in the Gold Coast neighborhood on the corner of Scott & Astor. I spent my formative, teenage & early adult years living at 52 E. Scott , the people who lived in the building throughout the period were all wonderful & quite a influence on nurturing the Artist in me. Over the years several different moved in & out of the building among them were the Drakes, Dr.&Mrs. Coogan , the Weese's, the Rovner's . I attended Ogden Elementary from 1961 to 1968 , Lane Tech 1968 to 1972 taking the Comm. Art course, I attended the Chicago Academy of Fine Art from 1973 to 1975 studying Cartooning, Animation & Film Making, The School of the Art Institute in 1975/76 studying Animation, Columbia College 1976/77 studying Writing, Television Production & Intro. into Television. In 1976 my Pop pasted & I took over his job while still doing the school it lasted about a year I in the interim had discovered Punk Rock & the Bar La Mere Vipere & I had come to a crossroad & I been in the Bar business since. I have been drawing & painting as long as I can remember I originally painted in oils & was introduced to this medium by my x-wife Marilyn. We would use the dyes to make hand painted Tee's , pillows, & baby blankets, Marilyn had some painting she had done w/ the dye which she quilted by adding a batting to the back of the painting which gives the piece a quilted/ relief effect. Working with the fabric dyes, needle & thread I feel as though I'm working WITH the piece as oppose to working ON a piece with paint, this makes me feel more at one with the piece ( I have been known to sign in blood on some piece's" quite by accident ") For most of my early pieces I did them late at night after coming home from working at the club, I found painting & sewing soothing after a night of filling the glasses of the masses. Most of my early pieces are portraits of historical figures, both known & obscure. Themes I've incorporated in the early pieces gangsters, musicians, black western, native Americans, freaks. Since the late 90's I've began to use different drawing styles & adding beadwork & objects to my pieces & some of the recent themes have been Haitian Voodoo, African- American Northern Migration, Lost in History on my lighter side I also have done a series of Fairy Tale & Nursery Rhymes. I am currently working on a series of pieces based on Japanese Prints."

Ken's artwork can be seen in the film " High Fidelity" & you can read about it in the book "Wild Chicago" and he appeared on a WTTW television episode.

Several of his quilts are featured in the International Review of African American Art - vol.17 #1- The Black- Indian Connection in American Art.

Ken was also featured in the film, You Weren't There, a history of the Chicago Punk Rock scene from 1977-1984.

FOR MORE INFORMATION OR TO PURCHASE  ARTWORK:   EMAIL INFO@ANATOMICALLYCORRECT.ORG